Jumping at shadows is no basis for Australian foreign policy. Common sense must prevail.

Since the middle of the 19th century, four periods in Australian history have been marked by intense antagonism towards China: the gold rushes of the 1850s; the push towards Federation in the 1880s; the   height of the Cold War in the 1960s; and, since 2012, the response to President Xi Jinping’s assertive projection of Chinese power.

For all the insistence on the “unprecedented” dimension of how Australia manages China’s rise, much of the discussion has been clothed in older conceptual garb.

Each of these eras has been characterised by feverish debate concerning China’s perceived and actual threat to social cohesion, territorial sovereignty or national security. In the 1960s, and indeed today, those fears have coalesced. Amid the clamour, hearing the voice of informed reason can be a challenge.

During the 1960s, for example, former diplomat Gregory Clark was one of the few who challenged the assumptions upon which the government’s foreign policy was then based, asking whether the fear driving Canberra’s approach to China had a rational basis or emanated from psychological and ideological impulses.

Today the new alarmists in Australia’s China debate depict a “silent invasion”, hawks recycle the Munich myth of appeasement, some realists view China’s rise and American decline in zero-sum terms, while others saddle the term “Indo-Pacific” with a teleological gravitas it struggles to bear. For all the insistence on the “unprecedented” dimension of how Australia manages China’s rise, much of the discussion has been clothed in older conceptual garb. 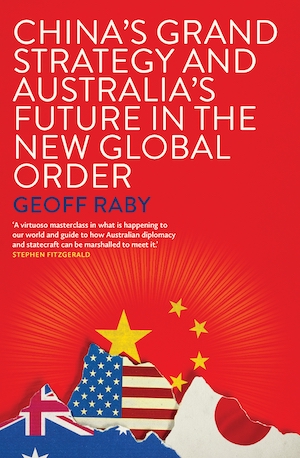 The argument for pragmatic engagement is getting harder and harder to make. The result, according to former Australian Ambassador to China Geoff Raby, is that Australia is now “locked into an unproductive relationship” with Beijing. And in the most sobering judgment of this important new book, Raby wonders whether China has already given up on Australia.

The timing of Raby’s work could not be more propitious. With relations at an all-time low, public discussion over how to manage China has, with some notable exceptions, lacked evidence-based argument. Raby brings to his subject not only his experience as an ONA economic analyst and then diplomat in Beijing in the mid-late 1980s, but also a perspective from the coalface as Australia’s Ambassador there from 2007 to 2011. Since that time, he has used lectures and op-eds to subject the government’s China thinking to critical scrutiny.

Much of Raby’s scene-setting will be familiar. Since Tony Abbott’s prime ministership, he argues, Canberra’s security and intelligence agencies have dominated the making of China policy. “Pushing back” now assumes the status of near-canonical doctrine. But where some see clarity, Raby sees inconsistency residing at the very heart of Australia’s China policy: it “talks the talk of engagement” but “walks the walk of competition and containment”.

Raby’s central arguments, however, relate to the constraints on China’s power, and the kind of “grand strategy” required by Australia to navigate a new world order.

An avowed realist, Raby argues the need to avoid “jumping at shadows”. He underlines the need to look at China “as it is, not as some fear it might become”. The counter to this will be that the Chinese hand has already been well and truly declared. But Raby challenges the assumption that China will follow the same pattern of America’s rise to power last century.

The real challenge for Australia amid this new global order, Raby suggests, is one of authenticity.

Rather he points to the constraints imposed on China by history, geography, resource reliance and poorly executed soft power. These limitations are well known: the point here is the challenge Raby throws down to the prevailing view that China poses an existential threat to Australian security and prosperity. Beijing has unresolved territorial issues with India, Myanmar, North Korea, Pakistan, Russia and, in the South China Sea, Vietnam. It is also “pinned down by the weight of the Qing Dynasty’s imperial ambitions” in Xinjiang and Tibet.

In Taiwan and Hong Kong, its strategic options narrow as critical demographic and cultural trends also move in the wrong direction for Xi. China’s resource and energy dependency, too, Raby suggests, would have had some in the Zhongnanhai waking up in the middle of the night in the mid 2000s and “screaming into the ceiling ‘What have we done?’” Lastly, Chinese soft power, tightly tethered to the party narrative, has clearly failed to arrest a sharp decline in global public opinion towards China.

For these reasons, Raby stresses, China has had little success in undermining Australia’s values, norms and institutions. Importantly, he eschews the catastrophising about the country’s institutional resilience that so often plagues discussion here.

The real challenge for Australia amid this new global order, Raby suggests, is one of authenticity. Canberra will “be taken less seriously and be less respected by regional partners if it is not able to manage its relations with China”. By virtue of hewing so closely to the American line, Australia has thus become a “proxy strategic competitor” to Beijing. He sees the new attachment to the “Indo-Pacific as an Australian and US form of buck-passing to India”, while the revived Quad has been primarily adopted by Canberra as a “form of strategic signalling to Beijing”.

To try and assist the country in navigating this new global order, Raby proposes a new “grand strategy”, a term not often heard in Australia’s foreign policy debate. It is required, he contends, not because of Australia’s strategic weight, but because of the very real prospect that Australia will find itself increasingly alone.

Raby’s conclusions are nevertheless sombre. China’s behaviour, he emphasises again and again, has not only lacked subtlety, it has also diminished its great power status.

Hugh White has also made this argument, and Raby agrees that defence spending has to rise. The difference in Raby’s realism, however, is that such a strategy, while needing to acknowledge that China will be the dominant power in East Asia, nevertheless is also based on “a reasonable assumption of the US’s continuing military pre-eminence”. And where White stresses Australia plunging into unknown strategic waters with few navigational instruments to chart the new coordinates, Raby looks to the middle-power activism of the Hawke and Keating governments as a model for the kind of diplomacy Australia needs to practice. Expand the Quad by all means, says Raby, but let China join it. The region needs new, inclusive security architecture.

Raby’s conclusions are nevertheless sombre. China’s behaviour, he emphasises again and again, has not only lacked subtlety, it has also diminished its great power status. Arguments about moral responsibility, however, will take us nowhere near the policy Australia needs: “while policy advisers may prick the moral indignation of their political bosses and feed a sense of grievance, this is not a strategy by which to advance a country’s interests”. They are words that should be pinned above the entrance of every parliamentarian’s office on Capital Hill. The view from Beijing, however, “may well be that, if Australia has chosen to be a strategic outlier, then so be it”.

And if the “new normal” bolted into the Australian strategic firmament is now one of “Australia standing up to a bullying China”, Raby maintains that the country’s leaders “have not prepared the public for the economic consequences of these policies”.

This book is above all a lucid clarion call for common sense. Argued with evidence and reason, but also informed passion, and sprinkled with anecdotes from his travels around China that sharpen the strategic insights, it is the necessary injection of precision into a debate that suffers not so much from too little memory, but from too much.

Markets and resilience in the face of economic coercion

Show Comments
Previous Article
But what does “rules-based order” mean?
Next Article
Peace Prize to WFP: A win for international cooperation