A safe place for young people in China to discuss their sexual and gender identities has suddenly been silenced.

The silencing of the LGBTQ communities in China is not a new or unexpected development (Pak Yiu/AFP via Getty Images)
Published 9 Jul 2021 12:00   0 Comments

This week, Chinese multinational technology giant Tencent shut down hundreds of accounts on WeChat linked to LGBTQ groups. Suddenly millions of queer people in China were confronted by a blunt message on their favourite social media accounts:

In response to related complaints, all content has been blocked for violating the ‘Regulations on the Management of Internet User Official Account Information Services’, and the account has been suspended.

The screenshots below show an LGBTQ student society account disabled alongside a screenshots of other “frozen” social media accounts. In 2018 the company, pressured under cybersecurity laws in China, had made an attempt to remove LGBTQ content from Weibo, another popular social media platform. However, challenged by a social media campaign, the company backtracked on that decision. Tencent has not issued any explanation on why the decision to remove the WeChat accounts was taken. 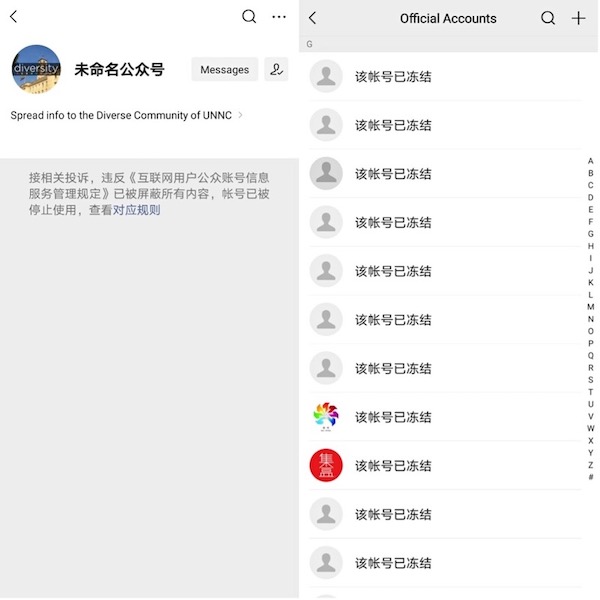 I happen to be a co-founder of the University of Nottingham Ningbo LGBTQ student society, known as DiversityUNNC, one of the only officially registered LGBTQ university student societies in China. We established the group in 2014 while I was a visiting student, carving out a space for conversations about sexual and gender identity. We enlisted support from university staff and invited parents to university open days. We held workshops and support groups. My mum visited China and attended the open days event, hugging a few crying undergraduate students, touched by her presence there. As we left the university, new students took over and the society has been going strong for seven years now. News that its social media account registered on WeChat was shut down inflicted deep, almost physical pain.

I looked at my social media as my friends from other universities in China woke up to silence. All of their accounts have been shut down and frozen overnight, leaving them wondering if it was the broader geopolitical tensions, some new invisible censorship decisions taken by the Chinese Party-state, or the Chinese social media giants’ attempts to err on the side of caution because of the recent purges of big corporations. Having had lived in China for eight years, I have seen accounts being blocked when they overstepped the boundaries by critiquing the Party-state, but nothing on this scale this before.

In this environment of semi-repressed LGBTQ representation, social media had occupied a special space that prior to this week was free to create and share content.

The silencing of the LGBTQ communities in China is not a new or unexpected development. LGBTQ content is not banned on mainstream media but also not allowed to air. This curious issue culminated in 2015 when a film director Fan Popo filed a lawsuit against the State Administration of Press, Publication, Radio, Film and Television for censoring his documentary “Mama Rainbow”. The only clear exception to that unwritten rule is the trans TV show host and actor Jin Xing, who has had a long career on Chinese television.

In this environment of semi-repressed LGBTQ representation, social media had occupied a special space that prior to this week was free to create and share content.

Another huge hit to the LGBTQ communities was felt in 2016 with the new strict requirements imposed on foreign non-government organisations via the “Law of People’s Republic of China on Administration of Activities of Overseas Non-governmental Organisations in the Mainland of China”. The law came into effect on 1 January 2017, requiring the organisations to register their information with the Ministry of Public Security, file multiple requests and reports for activities, and show that they are working on a temporary basis. The law forced many non-governmental civil society organisations to close down; organisations that were working with LGBTQ communities could “prove” that they were not harming the Chinese “social order” so were among the ones that suffered most.

In 2020, the Shanghai Pride, the longest running pride festival in China, was forced to shut down. The organisers commented that they were aiming to “protect the safety of all involved”, suggesting that this was not a positive community choice.

It was during that time that I felt a shift in the way that LGBTQ topics were discussed in China. In 2018, an English language report on trans activists that I co-authored and had shared on Facebook (and not on Chinese social media) seemed to have prompted an unexpected police visit to the organisation that had sponsored the report. We had to remove the report from the internet and only share private copies via email alongside the physical printed copies, dramatically reducing the reach of the information. Luckily, the community work that formed the basis of that report had already created strong social networks.

The censoring of WeChat accounts for LGBTQ groups has been the most recent blow to the communities that have not only survived but thrived and helped young people in China come to terms with their sexual and gender identities. Having grown up and with DiversityUNNC and learned how to be a proud queer woman through this channel of social media, the censorship of the student society social media accounts on WeChat came as a wave of pain. Not so much for myself, but for generations of young students that the upcoming period of forced invisibility is going to bring.